Xe Money Transfer is provided by HiFX Europe Limited. This review provides background to HiFX so you can get an understanding of the business that has recently rebranded to XE Money Transfer. For the full up-to-date review of XE Money Transfer visit our XE review here.

As Euronet has acquired both HiFX and XE.com they have not surprisingly decided to rebrand their money transfer offering in line with the globally recognised xe.com. HiFX was a well known UK brokerage firm assisting both individuals and businesses with their foreign exchange requirements. XE had previously offered users an online system which allowed individuals to send money abroad for remittance purposes but with little customer support available. The newly branded XE.com means the group can leverage the XE brand name but provide better support capabilities and expertise from the team that was built by HiFX.

HiFX was founded in the UK in 1998. It was meant to be a banking alternative for white-collar individuals to cut down on the cost of sending money overseas. The company grew over the next decade-and-a-half, establishing offices in the US, New Zealand, and Australia. In 2014, HiFX was purchased by American Euronet, which is a parent company to remittance transfer service Ria.

Euronet agreed to keep HiFX’s staff and initially its branding, using the company to expand its customer base from the Hispanic immigrant population served by Ria. In the year since the buyout, HiFX’s reputation for affordable and excellent service has only been amplified, making the company one of the best currency transfer companies available on a broad international scale.

A company that transferred over £134,549,388,534 by itself (over 200bn combined with sister companies), 8 international offices, and has over 8000 client reviews places the group on the top of the scale when it comes to credibility.

These are the two popular platforms for client reviews in the money transfer vertical, and we strongly rely on their feedback on our rating.

Positive:HiFX had left a strong positive impression with the majority of clients that rated them online. Among the qualities mentioned you can find:

Negative:We have located a small amount of complaints about HiFX, and also about the UK Post Office Currency Transfer service that they provided until mid-2015. The few we did find discussed these areas:

Most people are very happy with HiFX’s services and all of their offerings. These people, which amount to 85%+ of all client reviews, feel they have got a great deal in terms of pricing, and receiving the service as expected.

On the other hand, you can find some HiFX complaints around, some of them on the official HiFX client review pages, and some relating to the Post Office Money Transfer services that HiFX provided until mid-2015. These people are very upset about every aspect of service, and claim they have been charged with unanticipated fees.

To summarize, it seems like HiFX’s service may be inconsistent at times but it is generally good.

November 2017 update: HiFX seems to have dropped their fees. This is what we can see on their website but we don’t know whether this is a global policy or only for the UK. We will further investigate the matter.

Here is the most recent comparison they published: 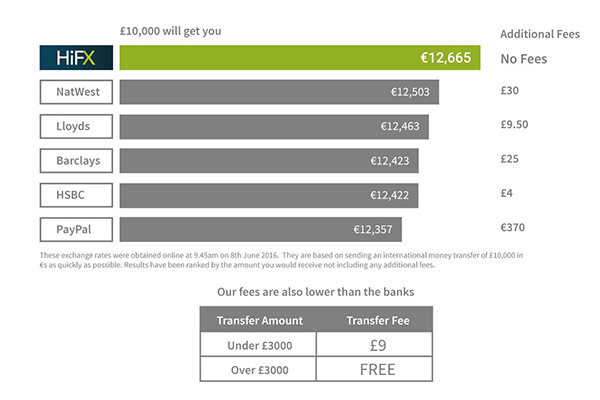 Limits: Very comfortable limitations online of €50 to €300,000 which makes this service available to almost everyone.

HiFX is up there with the big players like CurrenciesDirect, WorldFirst or TorFX in terms of fees and exchange rates.

Users can usually get friendly, helpful service available by phone or email, with support based in New Zealand, the United States, the United Kingdom, and Australia. Personalized advisors are available for large or complex transfers. Customer reviews are very positive on this front, describing service as competent, courteous, and prompt.

There are local offices for clients in various regions of the world, and they deal with more currencies than the vast majority of companies.

HiFX offers only spot contracts through their web platform. All normal hedging features, including spot and forward contracts as well as stop and loss orders, are available by phone.

Many of HiFX’s customers are businesses, but the company makes no special provisions for web merchants.

Standard offering on hedging, nothing special for merchants (or at least not advertised) and a sub-par app at the moment.

How does World First match up with its possibly biggest competitor, HiFX? Why did we gave World First 95.4% on our World First review, against HiFX’s mere 80.0%?

When you look at World First vs HiFX, there are several advantages that World First has in comparison, and this is why we believe it may be a better choice.

Thus, when we compare HiFX’s services to World First’s service, albeit they are very similar, we believe World First is the better options for most clients.