This Western Union review is intended to explain the pros and cons of using it for your money transfer needs. We focus on the important aspects like fees and exchange rates, and the quality of service provided.

Based on our editorial rankings, Western Union is not part of our list of top-rated money transfer providers for May 2020. We recommend you have a look at this Western Union alternatives.

Western Union is the behemoth of the money transfer business. In spite of growing competition in the past 20 years and being challenged by completely new forms of technology, this household name prevailed maintaining its leader status. It employees more than 7,000 people  across the globe and has a market cap of USD 8,330,000,000 ($8.3bn – true for May 2019). The scariest figure about it is that fact they move more than $80bn each year between customers.

Here are some  screenshots from their corporate website (at https://corporate.westernunion.com/annual-report/highlights.html) with more interesting figures 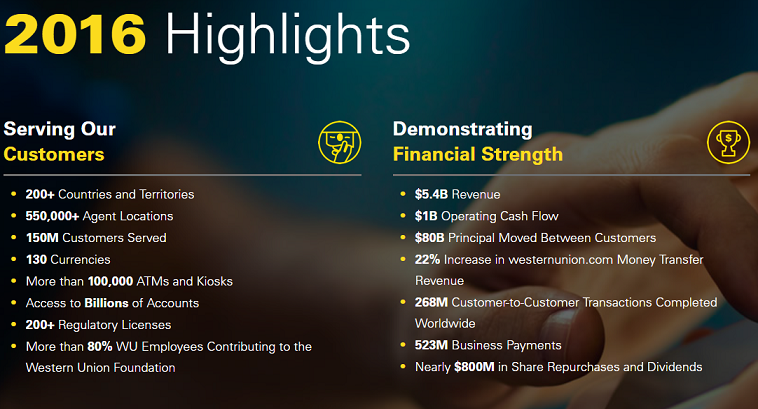 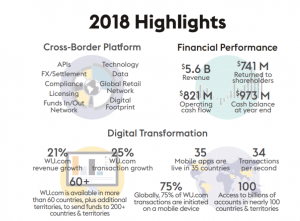 Historically Western Union was established to provide  telegraph services, and even back then it was an industry leader with a particular focus on innovation. Western Union had a significant role in bringing the world together as a telegraph company, and has a similar role in shaping the future in its current role as a remittances provider.

Western Union was the first company ever to send a transcontinental telegraph, and is one of a few remittances providers in some of the world’s least connected regions. It boasts more than 50,000 agents, 100,000 ATM’s in 200 countries, numbers no one can compete with.

Western Union has got everything going for it in terms of size. It has been running for so long and moving such immense volumes they are not even comparable to any other competitor in the field. Transferwise is one online money transfer competitor growing at a staggering pace and reporting more than £4bn in transactions monthly but that’s still small in comparison to WU’s annual volume of $80Bn.

Being the largest in the field also exposes Western Union to criticism. There are thousands of client reviews online which are predominantly highly negative, as well as media articles (like this one on the Economist) which portray Western Union as extortionate  with its fees.

Additionally, Western Union is one of the most abused platforms by scammers. A large portion of the money transfer scams across the globe are made through its platform, and it has received an enormous fine from the regulator for not preventing more. This was not Western Union’s only fine, as the firm has also paid $60m in regulator fines for a lack of compliance with AML laws.

There are dozens of online websites where you can find Western Union client reviews on. Western Union and even its online service WU.com is as big as all of its competitors combined. Nothing in the world says an international money transfer more than Western Union.

There’s why we expected to find huge quantities of reviews, as well as plenty of complaints. What we didn’t expect was how many of its reviews would be complaints.

We have chosen to have a comprehensive look at all the platforms and aggregate scores. It is not automatically processed, and that means this date will be true for May, 2019:

Although the figures aren’t that bad and convey that 82% of the clients are ultimately happy with the service, it is also not a good figure. In comparison to our top money transfer providers Western Union as a lot more complaints to positive review ratio, and if you look at the sheer numbers you’ll come to realise that there are hundreds of complaints about the firm.

Another thing that really pops out of this analysis is that one particular platform has 12% in complaints, while others have 90% complaints. Of course, the TrustPilot UK/USA is one of the largest platforms, but it is still suspicious in a way that the rating there is so different than all the other platforms, and we will further inspect it, especially given when you work through the reviews mostly all seem negative.

Western Union has hundreds of complaints to be found online about almost every aspect of its services. Some are the just within the normal range of complaints (people who were not successful at using the service and the like), and others are making pretty bold accusations of the company missing out on deadlines and providing horrible service.

On the other hand, there are thousands of happy customers that left their positive feedback on one particular platform (TrustPilot).

The bottom line is that it’s impossible to clearly say one way or another, but what we can certainly said that regardless of anything else, the company has about x10 the number of complaints its direct competitor Transferwise has received to date.

Fees are variable and often come by surprise. Western Union’s website admits that “Fees start at $4.99 to send up to $20 online.” But they never explain what the full range of fees is, on our testing we have been charged as much as $160 to send $4,000 abroad! (through debit card funding). That is remarkably more expensive than it would have cost with some of their competitors like Transferwise or Currencyfair.

For mobile transfers, the fee is more reasonable but still very high: $1 for up to $10 sent.

Our research, backed by statistics from data from the World Bank demonstrates that Western Union’s fees and exchange rates are more expensive for the end-client than with competitors. On most currency routes that competitors like Transferwise or Azimo are able to handle, Western Union is more expensive. On its online platform you can see that the differences are sometimes quite small, while on WU branches, it is normally a lot more expensive.

$1 to $7,500, or currency equivalent, based on the online calculator. It is safe to assume that if you need a bigger amount sent, you will be either moved to WU Business Services or get higher permissions on your account upon a compliance check.

The minimum amount to transfer online is $20 or equivalent.

Western Union money transfer is notorious for relatively high margins. While in many cases, and particularly on cash to cash transfers into areas where remittance providers are scarce. Even the former secretary general of the UN has proposed to look into this phenomena carefully because high remittances cost lead to a direct impact on some of the poorer countries in the world.

The costs of sending money even through more popular corridors is extremely high in comparison to some of the competitors.

From WU.com’s online calculator taken 16:04 UK time with a real mid-market rate of 1.35 USD to AUD, these are the rates that were provided:

These rates represent a margin of 3-4% just on the exchange rate, while the fee for a Debit Card payment represents additional 4%! In comparison to that view Currencyfair’s online calculator below: 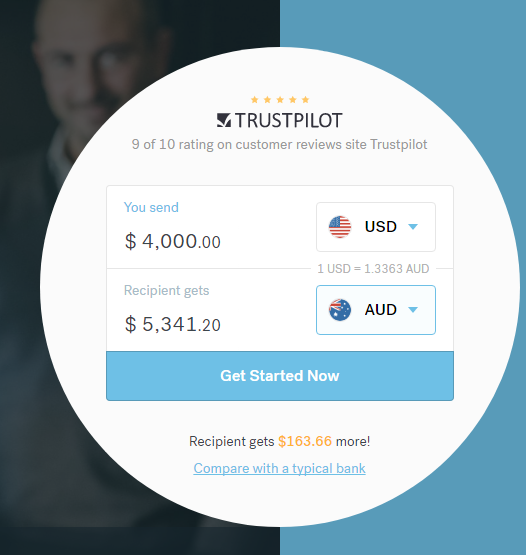 The rates offered by Currencyfair was 1.3325 which represents a margin of just over 1% which is far more reasonable for this corridor.

Although some may say comparing Western Union’s rates to the pure-online providers isn’t fair because WU has far more costs in the form of thousands of offices and hundreds of thousands of employees, we say that Western Union should revamp their pricing model to stay competitive in these the popular routes of GBP-EUR-AUD-USD.

On one hand, Western Union is the most global company we tested. More currencies, more agents, more locations than anyone else (the only company that comes near is Moneygram). On the other hand, the type of service provider by Western Union is only apt for small remittances transfers, while some of its startup competitors are able to handle both smaller and larger transfers.

App: Western Union’s currency transfer app may be its brightest facet. While it’s still expensive to use, the experience is supposedly very smooth. Their online reviews on Play Store are glowing.

Western Union cannot really be compared to anyone else with the exception of Moneygram, its closest competitor. It has been operating for over 100 years, handling almost every possible currency and enabling cash pickups in destinations that no one else does. Western Union is in many ways a bridge between western countries and the third world. It is the largest and most popular mean of transferring money abroad in the world, with the exception of banks.

On the other hand, Western Union’s fees are higher than those of competitors for many routes that we have sampled, and its reputation is not spotless (with just recently paying half a billion dollar fine). There are hundreds of complaints in regards to various aspect of its service scattered across the web.

In short, WU.com advantage lies in the accessibility and dozens of years of experience rather than pricing.