This XE Money Transfer review is intended to explain the pros and cons of using this company for your future money transfer needs. We focus on the important aspects like fees and exchange rates, the quality of the online trading platform, and the level of service provided. XE Money Transfer is a merger of Xe.com and HiFX that took place in 2019.

XE.com, which was established in 1993 in Ontario, Canada, is one of the Internet’s first currency exchange rate providers. Nowadays, there are hundreds of websites offering up-to-date information (we also have our own foreign currency rates section), but back when XE was established, there were none.

Between 1993 and 2002, together with the popularization of the Internet, XE.com became a synonym for everything currency related. It created a variety of tools, graphs, and APIs, and many companies were happy to pay a monthly retainer to gain access to them.

In 2002 XE started XE Trade, an online international money transfer service. While it was still selling currency data packages to companies, this has supposedly become the company’s main revenue stream. Since 2002, XE Trade Money Transfers has processed more than $10 billion in global payments and has served thousands of businesses and individuals.

In July 2015 XE.com was bought by Euronet, the owners of HiFX and Ria money transfer (among others). The company employed 20-30 employees in Canada prior to the purchase.

XE Money Transfer, now provided by HiFX, is regulated in Europe, Australia, Canada and New Zealand. Adding to XE’s existing licenses in the US.

In its younger years and prior to using HiFX as their payment providers (as part of the acquisition by Euronet Worldwide), XE worked with Western Union. Which is also, of course, fully regulated, being the largest non-bank money transmitter in the world.

XE’s Announcement on Moving to HiFX in 2016: 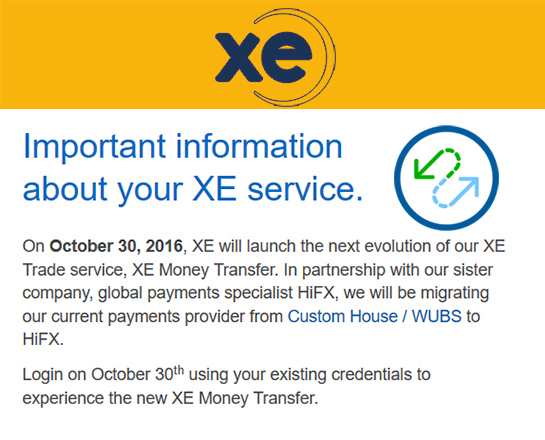 XE.com is well-established and appears to be trustworthy considering how long it has been operating. It is extremely well-known as the world’s currency authority (Its motto is “the world’s favourite currency site”).

XE Money Transfer is now being consistently delivered by HiFX who have regulated themselves with the FCA and other jurisdictions. This is preferable to the previous set up where you would hope XE.com were choosing the right outsourced FX partner for your transfer. It is still not listed as one of the best currency transfer companies to provide the service

There are over 29,000 TrustPilot reviews which are 96% positive. With the strong XE brand, usage of the service and indeed the number of reviews appear much higher than before, perhaps incorporating HiFX reviews too.

For the sake of comparison, a company like World First has around 7,000 verified reviews on Feefo.

A small number of  XE reviews we have discovered online are negative, detailing a number of reasons for their poor rating: non-responsive staff, poor rates, and a trickier online platform.

The 96% of positive reviews we have found online provide the complete opposite notion. The positive reviewers are extremely satisfied with the service they have received, the rates, and every other aspect.

There are additional reviews on the Comments section of this review by non-verified clients who provided feedback in regards to the service they have received.